MJ’s antigravity step secret is out 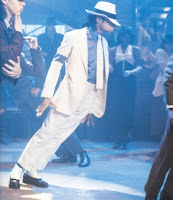 MJ is known for many things- also as innovator, who invented and patented "system for allowing a shoe wearer to lean forwardly beyond his center of gravity by virtue of wearing a specially designed pair of shoes" (US patent5,255,452). A heel slot in the shoes gets hitched to retractable pegs in a stage floor. Wearing the shoes, Jackson (or anyone) could seem to lean past his center of gravity without toppling. The effect would be most striking in live performances, during which harnesses and wires would be too cumbersome or impossible to disguise.
Source:Â USA Today

Posted via email from ipminds’s posterous

This entry was posted in Patent. Bookmark the permalink.